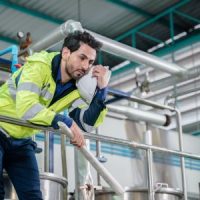 We all get tired. Sometimes it happens from a restless night, other times from a fun night out enjoying evening festivities with friends into the wee hours. Sometimes we can simply cure our daily fatigue with a cup of coffee, a quick walk or run, or a catnap in the middle of the day. However, sometimes fatigue is just more than a symptom of a bad night’s sleep, whatever the cause. Indeed, sometimes fatigue is caused by overexertion in the workplace. Fatigue in the workplace caused by overexertion can manifest itself in many serious ways. Work-related fatigue can result in symptoms of mood swings, disordered eating, problems with the stomach and digestive system, problems with sleep, and mood disorders, among other serious problems. Workplace fatigue is such a serious problem that the Centers for Disease and Control Prevention (CDC) has issued guidance to the public about work and fatigue. The findings from the CDCs guidance are important for Mississippi workers to know.

What is Fatigue Under the CDC’s Guidance?

Most people likely define fatigue as being extremely sleepy or tired. The CDC defines fatigue as “a feeling of weariness, tiredness or lack of energy.”

What Factors in a Workplace Cause Fatigue Injuries?

What are the Dangers of Fatigue in the Workplace?

According to the CDC guidance, severe fatigue can impact any worker in any job or industry, and can have serious consequences to both worker safety and worker health. Fatigue is dangerous because it can slow down a worker’s reaction time, harm short-term memory, reduce a worker’s ability to concentrate and pay attention, and impair a worker’s overall judgment. Some studies indicate that suffering from extreme fatigue can even have the same effect on a person as being drunk. It goes without saying that extreme fatigue in the workplace is dangerous and protections should be in place in every workplace to prevent worker fatigue.

Help with Your Workplace Injury