Defective Airbag Deployment. Who Is Liable? 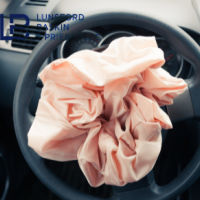 Airbags are important pieces of safety equipment for a car. They are gas-inflated cushions designed to create a protective barrier between drivers and passengers and the hard surfaces in their cars at the time of an accident. They work by relying on crash sensors to trigger the rapid expansion of nitrogen gas into the cushion, which may pop out from the steering wheel, door, roof, dashboard, or seat of your car, depending on whether they are front or side airbags. Although airbags were first offered in a very limited capacity (to government cars) in the 1970s, they did not become mandatory in all new cars until 1998.

Airbags are overwhelmingly safe, but occasionally they are defective, installed incorrectly, or not installed at all.

What could go wrong?

In 2020, the state of Mississippi received $1.2 million as a result of a settlement with Honda. Honda was alleged to have failed to inform customers that their airbags could explode and injure passengers. According to WLBT, Mississippi’s attorney general, Lynne Fitch, declared that the state would “hold companies accountable and require fairness and integrity when dealing with customers in Mississippi.”

In November of 2020, a driver of an older Volvo was killed by metal fragments from an exploding airbag, causing a recall of 54,000 cars. Some of these cars were sold or registered in Mississippi.

What injuries could occur as a result of a defective or improperly installed airbag?

If you believe that you have been injured by an improperly functioning airbag, or if a family member has been killed, you will need an experienced car accident attorney to make sure that you are properly compensated and to discuss the option of litigation.

Who could be liable?

When you hire our firm of Lunsford Baskin & Priebe to represent you, we will protect your rights and fight for the maximum compensation possible after your airbag injury. We will conduct an independent investigation and gather all evidence. We will make sure all responsible parties are on notice and speak with witnesses.