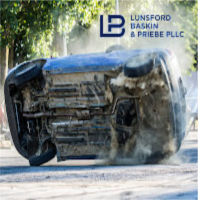 Although all car accidents are traumatic and frightening, there is a particular kind of terror that comes from being thrown around upside down as a vehicle rolls over with you trapped inside of it. Rollover accidents have a high fatality rate, especially for drivers and passengers who are not restrained by seatbelts.

Rollover accidents have become somewhat safer for occupants as new safety features have been introduced.

Electronic Stability Control (ESB): This helps a vehicle remain on the road after a driver has to apply brakes during a turn. The NHTSA has mandated this device in all new passenger vehicles manufactured since 2012.

Side impact airbags operate like a curtain that protects occupants from slamming their heads against side windows. They work well in addition to seatbelts but are not meant to be a  replacement for them.

Variable Ride Height Suspension Systems: These can allow vehicles to ride higher over rough terrain and ride lower on highways, making them less top-heavy and less likely to roll over in a crash.

Types of vehicles most likely to roll over

August 14, 2021: One person was killed and another critically injured in a rollover accident on Louisiana Highway 3132 at West 70th Street in Shreveport. Both the driver and his passenger were ejected from their pickup truck. Witnesses said that another vehicle had sideswiped the pickup truck, causing the rollover.

June 28, 2021: A 19-year-old woman was killed in a single-vehicle rollover crash on Farm Supply Road in Jefferson Davis Parish. The vehicle left the road and rolled onto its roof before becoming submerged in a flooded field.

June 10, 2021: A Louisiana man was killed and his passenger injured in a single-vehicle accident in Michigan that caused his car to roll over several times. The driver was not wearing a seatbelt and was ejected from the vehicle. Police believe that speed was a factor in the accident.

If you have been involved in a Louisiana rollover accident, you may be facing serious injuries and not know where to turn. Whether the fault lies with another driver, poorly maintained roads, or defective vehicle equipment, you may be able to collect compensation for your injuries and damages. Contact an experienced Louisiana car accident attorney.

When you hire Lunsford Baskin & Priebe PLLC to represent you, we will protect your rights and fight for the maximum compensation possible. We will conduct an independent investigation and gather all evidence. We will make sure all responsible parties are on notice and speak with witnesses.

After we have your medical records and billing, we will verify the extent of your injuries and what your future prognosis is. In serious injury cases, we may need to retain medical experts and vocational experts to explain what your future care needs will be.

Negotiating with insurance companies is one of the most stressful aspects of a claim. We will handle all negotiations. If discussions break down or there’s an impasse on liability, we will prepare to file a lawsuit on your behalf. If it becomes necessary to take your case to trial, we have the resources and experience. We aren’t afraid to back down from an aggressive court battle.

To learn more about how we can help you after being injured in a car accident, contact Lunsford, Baskin & Priebe, PLLC today to schedule an initial consultation.