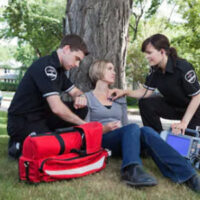 Now more than ever, emergency responders put their lives at risk every time they answer calls for help. In fact, police, firefighters, and other first responders have a much higher injury rate than other categories of workers. That includes workers in dangerous occupations, like fishing, construction, energy production, and mining.

Firefighters are especially at risk for toxic exposure-related illnesses. Smoke usually contains tiny particles of heavy metals. Additionally, many Jackson buildings and dwellings were built before 1980. As such, they probably have asbestos. These microscopic fibers, which are often in smoke, cause mesothelioma, which is a rare and aggressive form of cancer, and a number of other serious illnesses.

Establishing a work-related connection is sometimes difficult in these cases. However, in Mississippi, there is a presumption that first responders who contract certain illnesses, mostly certain types of cancer, contracted the toxic exposure illness at work.

If this presumption is unavailable, compensation is still usually available. The burden of proof is only a preponderance of the evidence (more likely than not). So, a little bit of proof, like a buddy’s statement, goes a long way.

Slip and fall accidents are among the most common workplace injuries. Falls are especially serious if the victim has a pre-existing condition. These injuries often have short and long-term consequences. Immediately after a fall, victims must normally contend with severe broken bones and head injuries. Typically, injuries like these never fully heal, even after extensive physical therapy.

When first responders answer emergency calls, they do not have time to obey traffic laws. At the same time, the number of distracted drivers and other impaired motorists has increased significantly. As a result, motor vehicle collisions in eroute to an emergency are part of the job. These collisions are especially common at intersections, when cross traffic fails to yield the right of way.

Post Traumatic Stress Disorder is a physical brain injury. Exposure to extreme stress triggers a chemical imbalance in the brain. The amygdala (part of the brain that controls emotional responses) gets bigger, and the cerebral cortex (logical response controls) shrinks. As a result, these victims experience symptoms like depression, flashbacks, hypersensitivity, and mood swings. A combination of drugs and therapy usually eases the symptoms, but the injury itself is permanent.

Emergency sirens usually belt out around 120 decibels. Even brief exposure to such noises could be sufficient to cause hearing loss. Many emergency responders do not wear earplugs, so they are especially at risk.

If doctors catch this problem early enough, it is usually not too serious. Today’s hearing aids are more advanced than ever. But even the most sophisticated hearing aid only amplifies sound and blocks background noise. If the eardrum is damaged, even in the slightest, the victim’s only option is usually risky surgery. Not everyone is a candidate for this procedure, and there are no guarantees of success.

Count on a Diligent Attorney

Emergency responders risk serious injury every day. For a free consultation with an experienced workers’ compensation lawyer in Jackson, contact Lunsford, Baskin & Priebe, PLLC. We do not charge upfront legal fees in these matters.